Last week, APRA announced that they would be removing restrictions that had been keeping investor credit growth under 10 percent a year.

They are now looking to replace these restrictions with more permanent measures to strengthen the lending standards of Australian Banks. It will also place the onus on bank boards to provide assurance on the quality and safety of lending standards.

This is likely a move by APRA to be less prescriptive to the banks about who they should lend to, and rather concentrate on controlling overall household leverage.

The below article is written about the APRA changes and is courtesy of Stephen Letts from ABC News.

Despite conceding that risks in the property market remain “heightened”, the key bank regulator will remove the speed limit on investor lending.

APRA’s move to a more targeted approach was highlighted in recent submissions to the banking royal commission.

While none of the banks came out of APRA’s targeted review of residential mortgage serviceability particularly well, Westpac was fingered as a “significant outlier”.

The review of 420 mortgages approved by Westpac — including the St. George and RAMs businesses — found numerous failings in serviceability checks.

“In particular, its focus on ensuring the banks ‘obey’ the responsible lending laws, and with boards and management likely to be much more risk-adverse, further tightening of underwriting standards are highly likely across the industry,” Mr. Mott said.

“This could potentially lead to a sharp reduction in credit availability.”

“Combined with a weaker asset quality and questions over the enforceability of security in the event of irresponsible lending, we have a cautious view on Westpac and the broader Australian banking industry.”

Interest-only limits may be removed soon

The so-called investor lending speed limit was introduced in 2014 as property investors ploughed into the market, sending home prices soaring and sparking fears that the highly leveraged loans were ratcheting up risk in the banks and the broader economy.

An additional speed limit introduced by APRA last year, requiring banks to keep interest-only loans to less than 30 percent of their mortgage portfolio, has been retained for the time being, but is also expected to be removed.

APRA said both measures were only ever intended to be temporary.

In a key development, APRA is placing the onus on bank boards to provide assurance on the quality and safety of lending standards.

APRA said for the 10 percent speed limit not to apply, boards will be expected to confirm that:

APRA chairman Wayne Byres said the decision to remove the investor lending benchmark reflected an improvement in lending standards by the banks, but there was still more work to be done.

“The temporary benchmark on investor loan growth has served its purpose,” he said.

“Lending growth has moderated, standards have been lifted and oversight has improved.

“However, the environment remains one of heightened risk and there are still some practices that need to be further strengthened.”

Australia currently has one of the highest levels of household debt in the developed world, sitting at more than 190 percent of household disposable income.

In terms of household debt to the size of the economy, Australia ranks only behind Switzerland with a debt-to-GDP ratio of 120 percent.

JP Morgan economist Henry St John said the move was not surprising given the 10 percent level had become largely redundant. 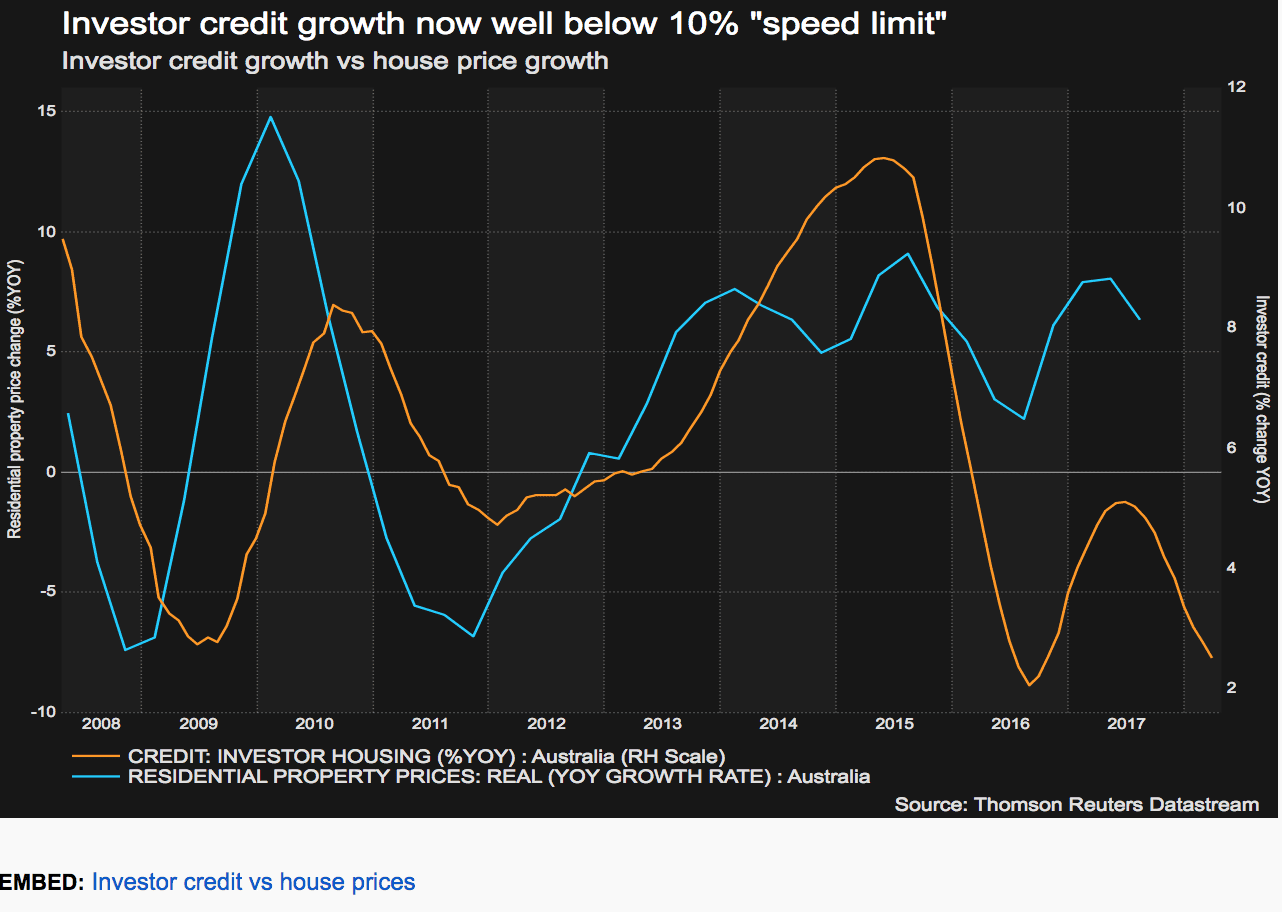 Investor credit, relating to banks’ entire mortgage book, is growing at less than 3 percent, down from the peak of well above 10 percent two years ago.

The annual rate of investor lending, as opposed to overall growth in the total mortgage book, is shrinking at close to 10 percent.

“We see this as a move by APRA to be less prescriptive to the banks about who they should lend to, and rather concentrate on controlling overall household leverage,” Mr St John said.

“This provides a simple backstop to complement the more complex and detailed serviceability calculation for individual borrowers, and takes into account the total borrowings of an applicant, rather than just the specific loan being applied for,” APRA said.

APRA’s current loan affordability tests, set in 2014, require proof a new borrower could repay mortgages at least 2 percent above the loan product rate, and a floor lending rate of at least 7 percent.

The key points to take away:

So how does all of this relate to you?

The best thing for you to do to understand how this may impact your investment decisions and/or your “Strategic Wealth Plan”, is to connect with your Client Manager. From there they can discuss with you any decisions that you may wish to consider.