Coronavirus Series Part 1: Where we are at in the global cycle?

Home/Coronavirus Series Part 1: Where we are at in the global cycle?
Previous Next

Coronavirus Series Part 1: Where we are at in the global cycle?

For all of our clients that have attended our One Day Intensive Training Program in the past five years, I have always dedicated the last session of the day to educating you in Economic Cycles. More specifically the Global Land Cycle, the most influential of them all.

Ask an everyday person how long an economic cycle is and the typical answer is seven to ten years. The long term historical evidence has shown though, that they’re not. The Global Land Cycle has actually run at an average of eighteen point six years (normally ranging seventeen to twenty-one years) and it has done so since the mid seventeen hundreds. On only one occasion has it fallen outside of this range, by only a year, and that required global war, (ie World War two). Just to give you a sense of how large an event must be to move the cycles only a little. 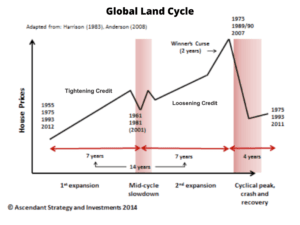 Let me briefly walk you through it starting from the first expansion phase. This phase averages around seven years and is restricted in its growth by tight credit and the hesitancy created by the not too distant recessionary period. The restrictions on credit are a fallout from governments tightening regulations that led to the over-valuation and over-leveraging of the previous boom.

Because of the constrained resources in this part of the cycle, what drives this phase is innovation & speculation. This speculation will eventually come undone as some innovation becomes viable and others don’t. A rebalancing is required and hence, a stock market correction is due. This is referred to as the Mid Cycle Slowdown.

The mid-cycle slowdown is a stock market correction, which will impact business & economies globally, but due to the tight credit restrictions of the first expansion phase, the market isn’t over leveraged and there is no significant corresponding correction in land values. The subsequent fallout of mid-cycle slowdown is an easing of credit, government stimulus and all the money that has been sitting on the sidelines for years waiting for value, now enters the market, driving the second seven-year expansion phase as we build to the peak of the overall cycle.

It’s worthwhile noting that the last two years of this second expansion phase is referred to as the Winner’s Curse and this is where continued easy credit, growing incomes and bullish sentiment push markets to again become overvalued but this time also over-leveraged due to loose credit of the previous four to six years. Eventually, this will lead to the next stock market correction, like the mid-cycle slowdown, but now as the market is over leveraged and lacks the buffers and safety nets required to sustain its assets, distressed selling & bankruptcies then push us deeper than the mid-cycle and into the 4-year recessionary period until the market balances out again. So that’s the cycle.

You may also notice the time between major stock market corrections being seven and eleven years, hence why people often think economic cycles are seven to ten years long. Depending on your age, you may be able to recognise some of these periods from memory. Our last recessionary period was two thousand and eight to two thousand and twelve and was known as the GFC. In the cycle before it, the recessionary period in the late eighties and early nineties was “the recession we had to have”.

You may also remember the last winner’s curse, two thousand and six to two thousand and eight. Personally, I can remember walking into first home opens, there would be eighty people there and ten offers all over the asking price, made that day. A bit older and You may even remember similar boom times in the late eighties. The days of Alan Bond and Laurie Connell, of Bicentenaries and America’s Cups.

The last midcycle slowdown we experienced was triggered by the dot com bubble of 2001. The invention of the internet drove huge speculation. When the mid-cycle slowdown arrived, the bubble burst and some internet stocks disappeared overnight. Even heavyweight Amazon halved in value.

Now looking as we head into this current mid-cycle slowdown, we can see we are coming off one of the great bull runs in stock market history where there have been virtually no corrections since 2011.

Now remember I have been teaching you there would be a mid-cycle slowdown in twenty-twenty for five years now and I even sent an email to all client back in December recommending that our clients change their super and share portfolios to a more defensive structure. Those that did have saved thousands. The largest I know of from one of our clients was three hundred thousand dollars.

As the first expansion phase was coming to an end, uncertainty has been building on the back of the US-China trade war, Brexit & tensions in the middle east and south china sea and eventually a global event occurs which is the final straw that breaks the back of the market and the bubble has to burst and here we are again a stock market correction. It just so happens, this time around the event was a global pandemic.

It’s also interesting to note though those previous pandemics didn’t cause the same stock market corrections because those pandemics occurred in different stages of the land cycle. Just take the two thousand and nine  H1N1 pandemic as an example. Estimates from the Centres for Disease Control are as high as half a billion people dying with one point two billion worldwide infected and yet we probably hardly remember it with no lasting impact on the economy.

Global stock markets will find a floor as fundamental investors enter the market seeking value. As opposed to speculation, fundamental investors don’t gamble on the possible future value of what they are investing in, they look for simple fundamentals like the price to earnings ratio of a stock. This value investing, along with easy credit and government stimulus will then drive the cycle on the trajectory to its peak.

You can already see this happening.  Governments and central banks around the world are now flooding the market with money. So far one hundred and eighty-seven billion dollars in stimulus has been approved here in Australia and two trillion has now been passed in the US. Governments are following suit around the world. The reaction to the mid-cycle slowdown has been swift, large and it isn’t at all over yet.

It’s these kinds of responses that set us up for the second expansion phase in the cycle. Coupling massive government stimulus with easy and cheap credit moves us toward the peak. This is anticipated to arrive around twenty twenty-six, twenty twenty-seven when the world will move into its recessionary period and the cycle starts again.

It is also very valuable for me to include here that one of the most common questions I receive from the public is “how was I able to buy thirteen properties in five years?

While I didn’t know it at the time,  I started my investment journey off the back of the previous mid-cycle slowdown. Simply put, the mid-cycle slowdown provides some of the best buying opportunities for the next eighteen years. Give or take a couple :)

That’s not to say that there won’t be challenges for many over the coming months. Some more than others. They may be people we care about or something you are facing yourself. My heart goes out to you.

I have created a video for anyone experiencing difficulty and what immediate relief there is available. Of course, you should also reach out to us via your Client Manager or any of our social media channels.

We are always here and it’s not uncommon that a chat with our team results in savings of thousands of dollars a year.

In the next article, I’m going to cover COVID-nineteen and its impact on the Australian economy and property market.