Home/Property magnates most cashed up on rich list
Previous Next 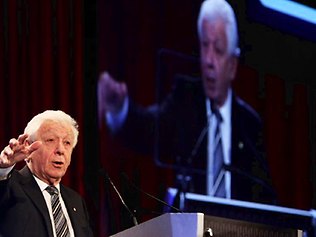 While mining moguls have some of the biggest bank accounts on this year’s BRW Rich 200 list, it is the property industry that has come out on top with the highest number of cashed-up players.

Former number one Frank Lowy, who moved from third spot last year, is now in the runner-up position after gaining about $400 million since last year’s list was published.

His $7.4 billion valuation is thanks largely to growth of the Westfield Group, the commercial retail business Lowy co-founded in the 1950s.

Another veteran of the list, and self-made property tycoon, Harry Triguboff, has boosted his wealth to $4.95 billion from $4.85 billion last year. He is now ranked number six.

Property remains the highest sector for wealth generation on the list, with 52 of the top 200 super rich drawing their wealth from real estate investments.

The highest ranked debutant this year is Chinese-based property developer Hui Wing Mau whose $4.82 billion fortune pushes him into seventh position. Mr Mau is chairman of the Hong Kong-listed Shimao Group and has built a property empire on the back of China’s property boom.

Meanwhile, the average wealth per person on the list has fallen to $884 million, down from $906 million last year.

The five biggest falls – on both dollar and proportional bases – are from the mining sector. Ms Rinehart topped the list of wealth declines.