Investors lag behind on rental rewards

Home/Investors lag behind on rental rewards
Previous Next

Investors lag behind on rental rewards 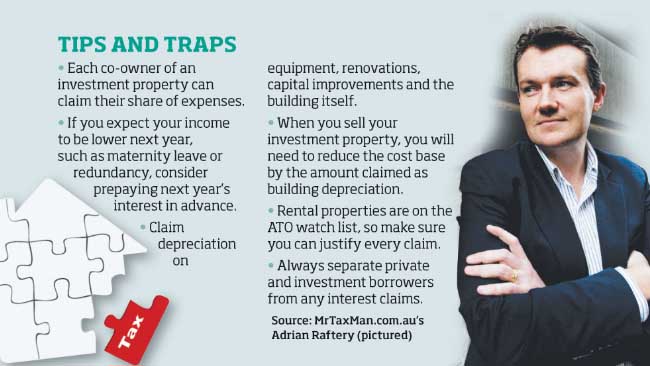 Almost two million Australians are expected to declare rental income in their tax returns this year, but less than 40 per cent will make a profit and pay tax on this income.

In most cases, this is a deliberate strategy, as investors offset the need to pay tax by claiming borrowing costs, capital works and other expenses, leaving them to build up capital gain as the property value increases over the years.

Yet many landlords could still claim more, experts say.

Borrowing costs were the biggest contributor to the losses, as interest rates, alone, counted for almost $18.5 billion in expenses.

Depreciation was the next biggest single expense.

Mr Taxman founder Adrian Raftery says one of the reasons for being a property investor is to enjoy the tax benefits.

“Outgoings to your investment property are allowable deductions and can be offset against other income. This generally results in a tax refund – so the more you can claim as deductions, the lower your taxable income and the higher your refund,” Raftery says.

Depreciation expert Deppro says many property investors are not making the most of legal deductions, with millions of dollars still going unclaimed.

“It’s estimated the value of such deductions would run in to the millions.

“Many investors don’t realise tax benefits obtained through depreciation can be equivalent to 60 per cent of the total purchase price of the property,” Bennion says.

Areas in which investors don’t take advantage of deductions include entitlements to common areas in unit complexes and depreciation claims on older properties.